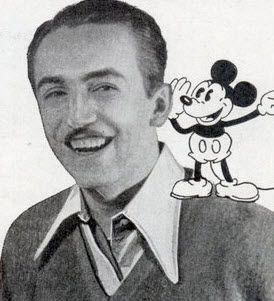 It’s true, here’s the story that put Walt Disney into a deep depression …

Walt Disney’s mother and father, Flora and Elias, were married on New Years Day 1888. For their Golden Wedding Anniversary, riding on the success of Snow White, the successful son Walt gifted them with a home in Toluca Lake (Hopeland), CA. The Disney’s loved their new home, except for the heat. Apparently the furnace wasn’t very good, and Mrs. Disney complained about the fumes. Jinx.

Enter good son Walt, who had studio workers install a new gas furnace in the home. I have always heard that Walt fixed it himself, but can not find documentation to support that. In the night of November 26th, 1938, Father Disney woke and found his wife laying on the bathroom floor. He himself passed out trying to transport her.

The next morning Alma Smith, the maid, came to work and upon entering the kitchen, became faint. She opened the doors and windows, and went to check on Mr. and Mrs. Disney. Mrs. Disney was dead, and Mr. Disney and Alma were taken to Hollywood Hospital where they recovered.

Mr. Disney was released in time to attend his wife’s funeral at Forest Lawn Glendale, at the Wee Kirk Church.

Police attributed the tragedy to a faulty connection in the gas furnace which allowed the home to be over come with carbon monoxide fumes.

Walt never got over the tragedy. Sadly, this could have been prevented, keeping Walt from going into a deep depression … if there was a carbon monoxide detector in his parents’ home. Additionally, I am confident Walt would have had one installed in his parents home had they been in existence at the time (the first co detectors came out a few years later in the 1940′s). Even though they are in existence these days, not everyone has them in their home …. and each year across America the “Silent Killer” carbon monoxide still takes the lives of 200-700 Americans. It’s a very small price to pay for the safety of our family. During the month of October we are offering 25% off on the investment of a top of the line contractor grade low level carbon monoxide detector. Give us a call today here at Rebel Refrigeration at 702-734-7750 or contact us to schedule your install.

Yours for a warm and safe winter,